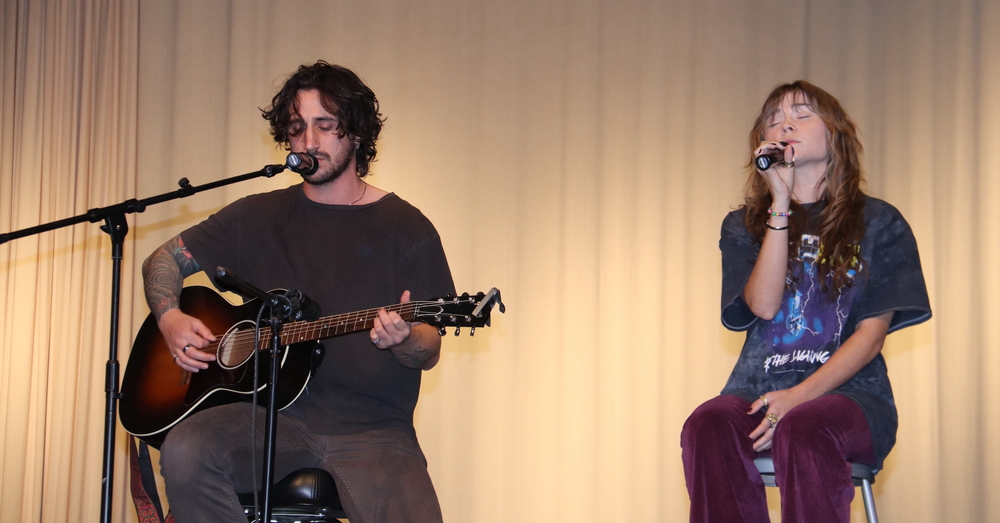 When vocal music teacher substitute Lindsey Weissman began filling in for music teacher Kyla Perry earlier this year, she began brainstorming ways to motivate and inspire her students, knowing that their musical experiences have been somewhat limited the last two years due to COVID-19.

She landed on the idea of a spring concert series.

“I came up with the idea to host a spring concert series,” she said. “Professional musicians of various backgrounds will come to the school over the next few months to play for the kids, have a little talk-back with them, and then workshop music that our ensembles are working on in a masterclass setting.”

Kicking off the concert series was pop singer/songwriter Aaron Rizzo, who was accompanied by Maggie Monica. They played several songs in the auditorium for the seventh- and eighth-grade band, and high school chorus classes on Thursday, April 7.

Rizzo’s influence comes from rock and roll artists like Chris Stapleton and John Mayer mixed with masterful songwriters like Ray LaMontagne, according to Weissman.

“Not only is he a touring musician, but also an audio engineer, producer and co-owner at The Candy Shop recording studio in Syracuse. So he’ll be able to provide students with an interesting insight into music business and production,” Weissman added.

If you were to judge the students’ reaction purely from their rounds of applause, the only assessment you could make of the spring concert series at this point would be a resounding success. Weissman is hopeful the upcoming guests will enjoy the same kind of reception.

“Next on the docket,” she said, “we have a jazz band coming from the Eastman School of Music at the end of April, featuring piano, bass, drums and horns, all of whom are currently completing Master's or undergraduate degrees in Jazz Performance.”

“Following the Rochester musicians,” she continued, “we're looking in the opposite direction to welcome singers from Ithaca College. IC Voicestream, a co-ed a cappella group who feature their own arrangements of pop songs, as well as individuals currently completing BFA degrees in musical theatre will visit to show the sheer scope of the human voice. A cappella music consists of replacing all elements of recorded music with voices, meaning each singer in the group will take on an instrument or musical effect and mimic it with their voice. Think “Pitch Perfect!” IC's esteemed musical theatre program funnels many of their artists directly into national tours and even onto Broadway itself; they will bring with them the classic Broadway belting sound.”

As for the last performance lined up, Weissman herself is included.

“Finally, I'll be closing out the series with a friend of mine in June,” she said. “She will be the soprano to my alto in a program of famous opera duets that will be accompanied by piano.”

Weissman hopes the spring concert series will inspire students the same way she remembers being inspired by similar experiences when she was in school.

“When I think back on my own experiences in middle and high school chorus,” she said, “many of the most memorable and invigorating moments were seeing professionals display the long-term product of the work we were doing. I was inspired to work hard because I witnessed the pay-off firsthand. With the pandemic, there was no opportunity to have those moments. The lack of live performances from Spring 2020 through this school year forced students to imagine, rather than experience, the energy and feeling of success after rehearsing and giving a live performance. So, since my expertise lies in performance, my first instinct was to find a way to bring back those necessary experiences.”