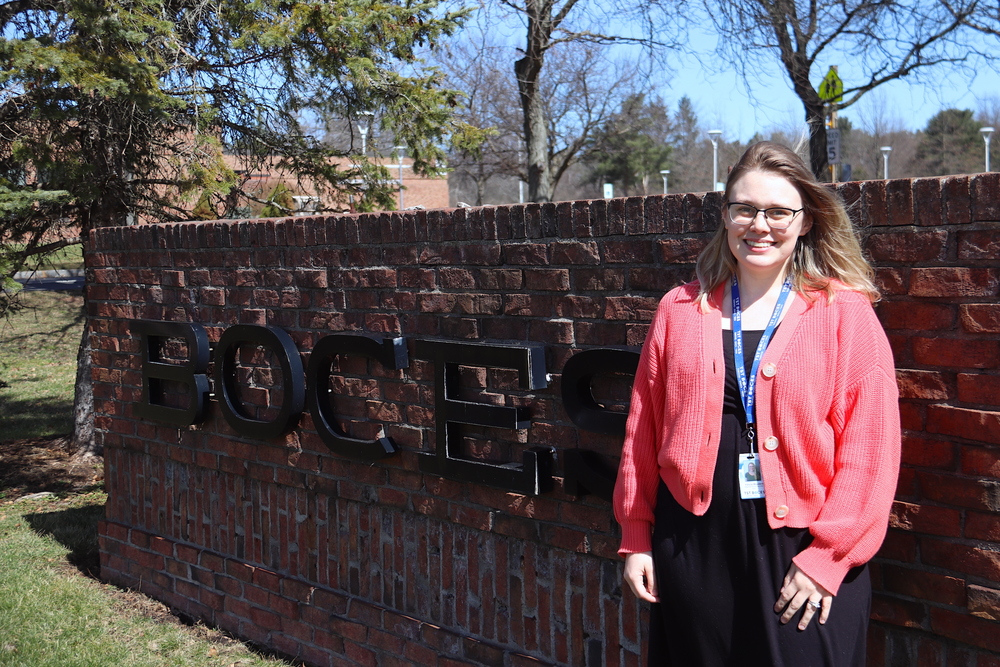 When Felicia Riley graduated from South Seneca High School in 2011, she had dreams of becoming a math teacher. So, she went to LeMoyne College for exactly that.

A little turn there, a little turn here, and well, she never taught math. But she did become a teacher – at least for a while. She even ended up teaching for a bit at her alma mater in South Seneca.

“I taught grades seven through 12 social studies, and also grades eight through 11 special education. South Seneca was actually the first school I taught at,” she said.

“It's a huge title,” she said while laughing, “that just means I go into schools and help teachers integrate technology effectively in the classroom with a purpose. We’re also trying to spread awareness for computer science and digital fluency standards – and build those standards into what the teachers are currently teaching.”

In talking to Riley, it was extremely apparent how passionate she is about her new position. She began working for TST BOCES in June part-time. Then she had a baby in July. Then she went on maternity leave. Then she came back on September 1, this time on a full-time contract. Since then, she’s been laying the groundwork for what she hopes is major progress in improving students’ understanding of what it means to have a sound “digital citizenship,” which Riley defined as: “the way you interact with the internet and the way you present yourself on your social media platforms. It goes hand-in-hand with your digital footprint. Knowing how important it is to show yourself in a positive manner rather than being a bigot online.”

She is laying that foundation in Candor.

“One of the projects I’ve been working on, they haven’t implemented yet,” she said. “But it’s going to be implemented next school year hopefully. I worked with Candor School District to build a series of digital citizenship lessons for middle school and high school. There are seven lessons for each school. They talk about how social media makes them feel, and try to identify how they feel about themselves in their social media profiles. Giving them challenges to decrease their digital habits or make their digital habits impactful is the end goal.”

“The end product,” she continued, “is for the students to make suggestions on how they can use social media to actually help the mental health of teenagers rather than hurt the mental health of teenagers. So I’m super excited for that curriculum to be implemented because I think it’s going to have a big impact. And I know other districts are already interested in implementing it, but we want to see how it goes first, and get some feedback on it. But ideally, it becomes a region-wide thing.”

If making sure students understand what it means to carry themselves well online in 2022 seems like it’s a huge undertaking, that’s because it is. More than ever students, teachers, and all parties in school districts are not only tasked with managing the world in front of them, but they’re also dealing with the ramifications of actions taking place on a computer or phone screen.

“We have heard a lot about increased cyberbullying in the area,” Riley said. “Whether it’s intentional or unintentional. It’s happening through social media, whether they are posting news articles, or images, or anything they’re finding out there. They’re not realizing that it’s fake, or impacting in a negative way. Schools really have to take hold of those digital citizenship standards, and integrate those into different curricula.”

“One lens we’re trying to do this through in my department,” she continued, “is to integrate it with SEL [social emotional learning]. Doing check-ins with students to figure out how they’re really feeling and what’s really going on. Trying to build those personal relationships with students. And we’re purposefully trying to build professional development in my department, and helping teachers understand SEL and really bring it to everything that they teach.”

One aspect of the gig that excited Riley is the amount of reach her work could potentially have.

“My favorite part about this job,” she explained, “is I feel like I’m impacting more students rather than being in the classroom and only being able to impact like 100 students – I’m working with teachers around the region, and I think I’ve been in all nine districts. I’ve worked with teachers and that means I’m reaching more than 100 students, because each of them have 100 students. So it’s way more reach.”

As for South Seneca’s role in how she ended up where she is today? She’ll be a Falcon forever.

“South Seneca really did prepare me for going out into the world,” she said. “I graduated from there with 10 more high school credits than I needed. I graduated and entered LeMoyne as technically a sophomore even though I still did four years there. So taking advantage of what South Seneca has to offer was huge. And staying in touch with my connections at South Seneca is what got me to where I am today.”